Glynn County, on Georgia’s southeastern coast, was created on February 5, 1777, as the state’s seventh county. It now comprises Jekyll Island, St. Simons Island, and Sea Island, as well as the mainland between the Little Satilla River to the south and the Altamaha River to the north. The county’s largest communities are the town of Brunswick, along with Jekyll, St. Simons, and Sea islands. Of these, only Brunswick, the county seat, is incorporated. Glynn County borders Brantley, Camden, McIntosh, and Wayne counties.

Before European colonization,  Indians of the Lower Creek Nation inhabited the area. In 1741 the Trustees of Georgia envisioned just two counties, Frederica and Savannah, but after the Trustees’ charter ended in 1752, the colony was divided in 1758 into eight parishes. Georgia’s first constitution of 1777 combined two of these parishes, St. David and St. Patrick, into Glynn County. Jekyll and St. Simons islands were annexed by the county in 1789, but in 1805 some of its inland area was lost when land from Glynn County’s western region was added to neighboring Wayne County.

The 422-square-mile county was named for John Glynn, an English lawyer and member of Parliament who was friendly to the colonies. Sparsely settled before the American Revolution (1775-83), the area saw most of its few inhabitants flee to Florida and inland Georgia during the war. After the war, however, veterans established homesteads in a number of Glynn communities.

Mark Carr, an English planter, lived in the area that became Brunswick. Carr, who arrived in the colony with General James Oglethorpe’s regiment in 1738, set up a tobacco plantation, named Plug Point, on which he built a number of tabby houses. He agreed to exchange his plantation land for holding elsewhere when, in 1771, the Royal Colonial Provincial Council chose the area as ideal for their planned city of Brunswick, naming it after the ancestral home of the German House of Hanover (the family of the king of England at the time). Brunswick is now a thriving deep-water seaport, crucial to the economy not only of Glynn County but also of the state and region beyond it.

Jekyll Island, now owned by the state of Georgia and managed by the Jekyll Island Authority, passed through the hands of several nations before coming to American hands. After the Creeks ceded it, French and then Spanish claimants gave it a variety of names before Oglethorpe named the island in honor of the English statesman Sir Joseph Jekyll. In the late 1800s the island became the Jekyll Island Club, originally a hunting club that quickly grew into a resort for wealthy northeastern businessmen, including some of the most prominent industrial leaders in America, and their families. The club finally closed during World War II (1941-45), and the island was sold to the state of Georgia in 1947, when it became the Jekyll Island State Park.

St. Simons Island was the site of Spanish missions in the seventeenth century. Seventy years later Oglethorpe chose the island for one of his first military settlements, establishing Fort Frederica in 1736 as a buffer against Spanish incursion from Florida. After Spanish invaders were defeated in 1742 at the Battle of Bloody Marsh, Oglethorpe’s regiment left the island and the fortress-town went into decline. Although St. Simons saw little action during the American Revolution, timbers for the U.S.S. Constitution (known as “Old Ironsides”), part of the new country’s first naval fleet in the 1790s, came from the island.

Beginning in the 1780s St. Simons planters produced high-quality cotton, but for multiple reasons the cotton era ended there in the 1830s. The island’s economic decline was finally reversed in the 1870s when the Georgia Land and Lumber Company chose St. Simons as the center of its operations. Stores, schools, and churches followed, and people from the inland began to vacation there. A thriving tourist industry has allowed the island to prosper economically, even in the face of such crises as the Great Depression of the 1930s.

Sea Island is another of Glynn County’s island communities. The businessman Howard Coffin purchased the island in the 1920s and built the Cloister, a luxury resort hotel. Owned by the Sea Island Company since 1928, the island has been the retreat of celebrities and leaders from around the world. In 2004 it was the site of the G8 Summit of world leaders. The Georgia Sea Island Singers are perhaps Sea Island’s best-known residents. The singers keep the traditions of their ancestors, who were enslaved, alive by performing their songs and stories all over the world.

The College of Coastal Georgia is located in Brunswick.

Among the local attractions are the Hofwyl-Broadfield Plantation, the historic St. Simons lighthouse, the World War II Home Front Museum, Fort Frederica, the Sea Island Singers, the Sea Island Golf Club, and the Georgia Sea Turtle Center on Jekyll Island. The annual Blessing of the Fleet takes place in Brunswick each May, and the St. Simons African American Heritage Coalition hosts the Georgia Sea Island Festival each summer. 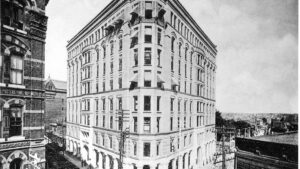 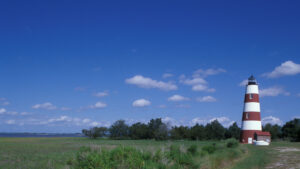 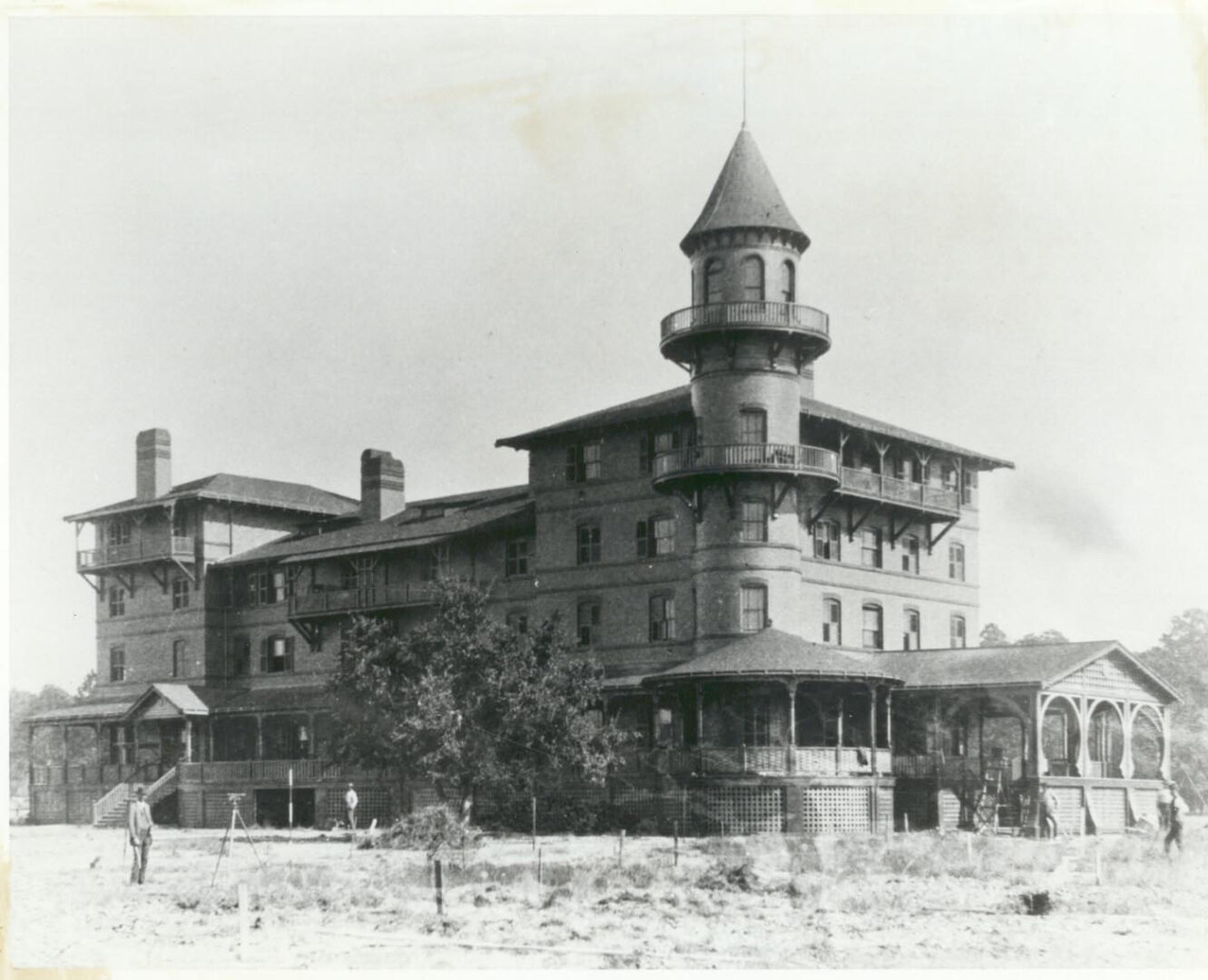 The Jekyll Island Club, a hunting club and resort for wealthy northeastern businessmen, was completed in 1887. The club closed during World War II and today is part of the Jekyll Island State Park. 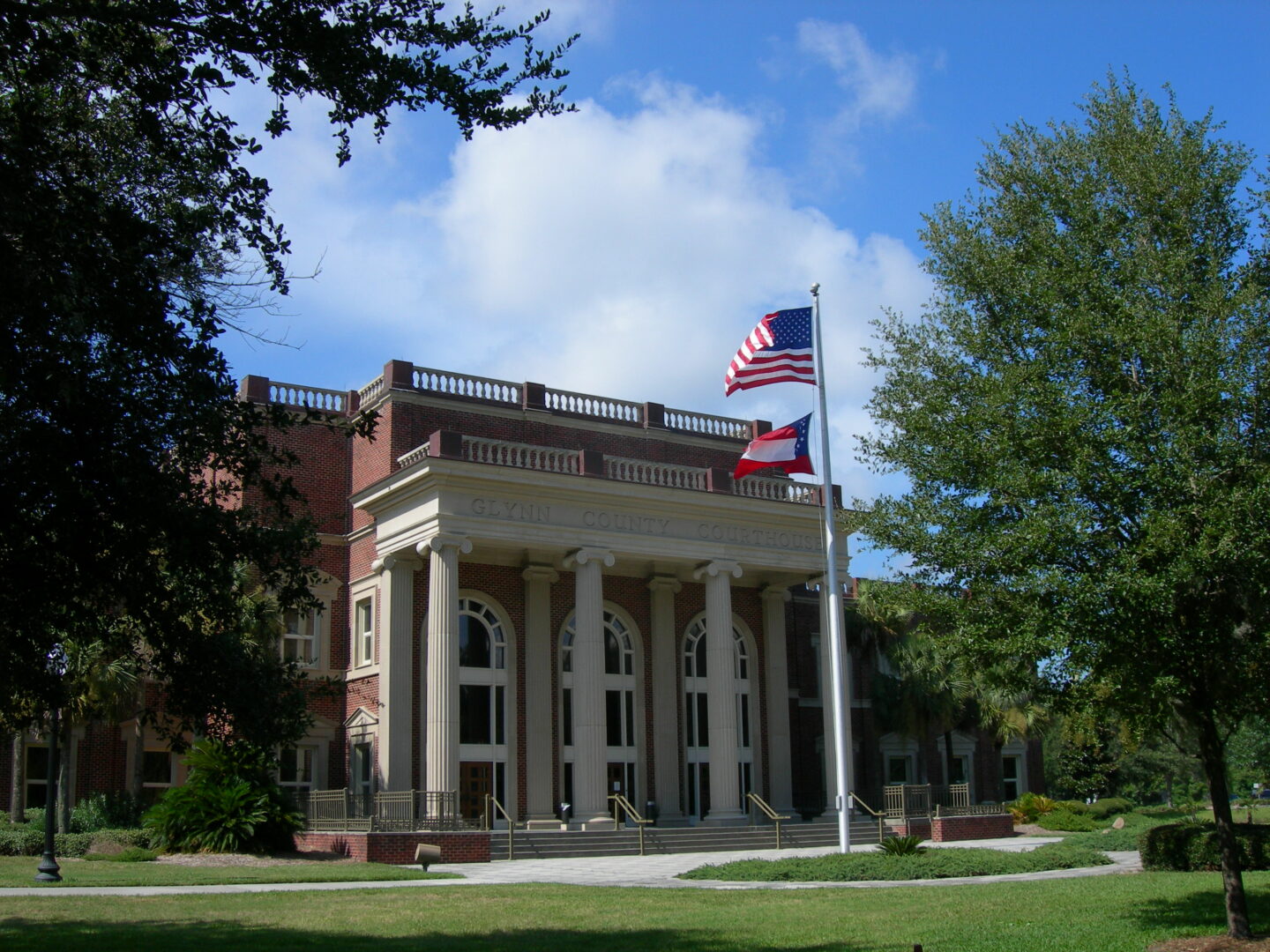 The Glynn County Courthouse, designed in a neoclassical revival style and completed in 1991, is the fourth documented courthouse to be built in the county. The W. Harold Pate Courthouse Annex was built several blocks away from the courthouse in Brunswick during the mid-1990s. 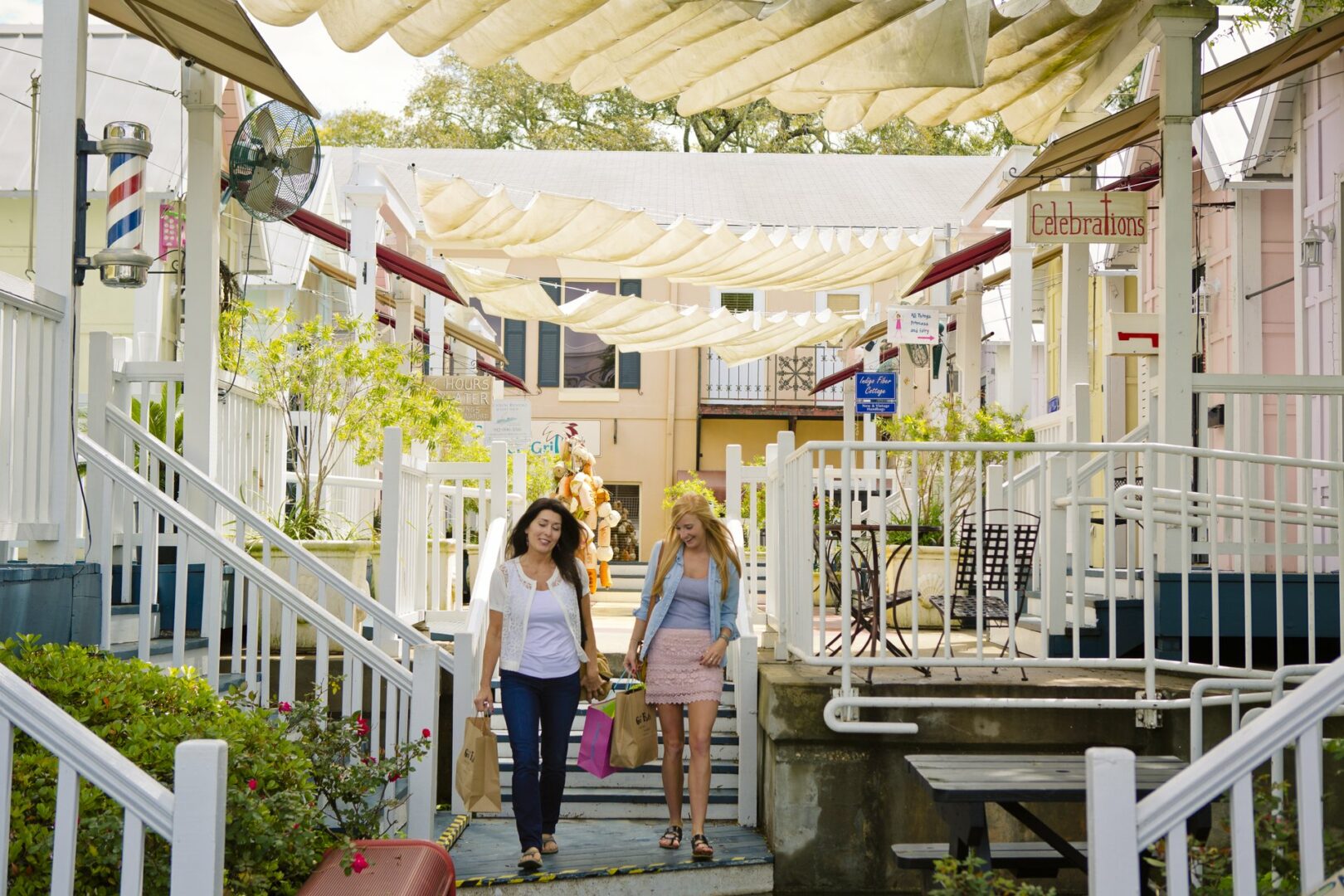 Tourists on St. Simons Island gather outside one of the island's many shops. The island suffered an economic depression at the end of the cotton era in the 1830s, but its fortunes reversed with the arrival of the timber industry in the 1870s. Today St. Simons enjoys a strong tourist industry. 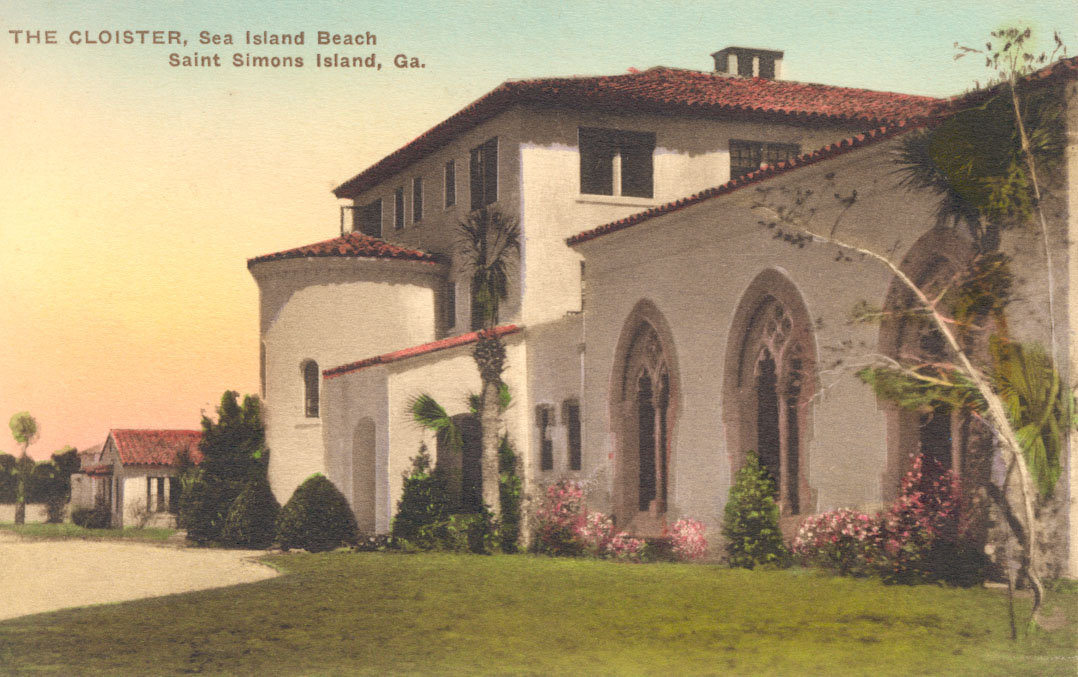 This postcard from around 1928 depicts the motor entrance to the Cloister, a luxury hotel on Sea Island. Owned today by the Sea Island Company, the island is a retreat for celebrities and world leaders. 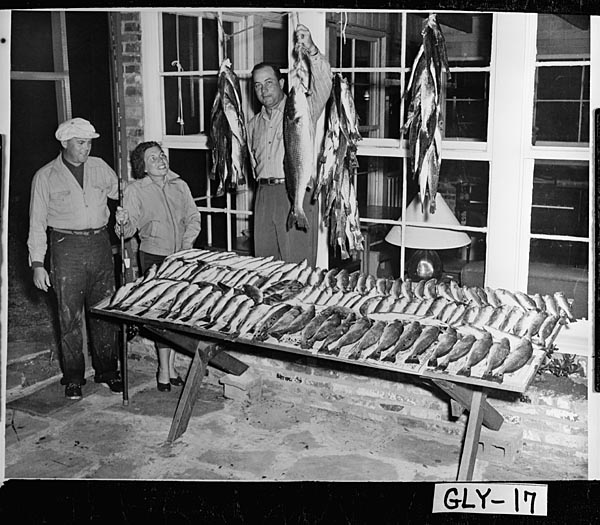 J. Roy Duggan, a board chairman for King Shrimp Company in Brunswick, displays his catch of spotted bass and trout on St. Simons Island around 1950. At left are J. O. Hice and his wife. Hice cofounded the SeaPak Corporation, a coastal Georgia seafood company that is known today as the Rich-Seapak Corporation. 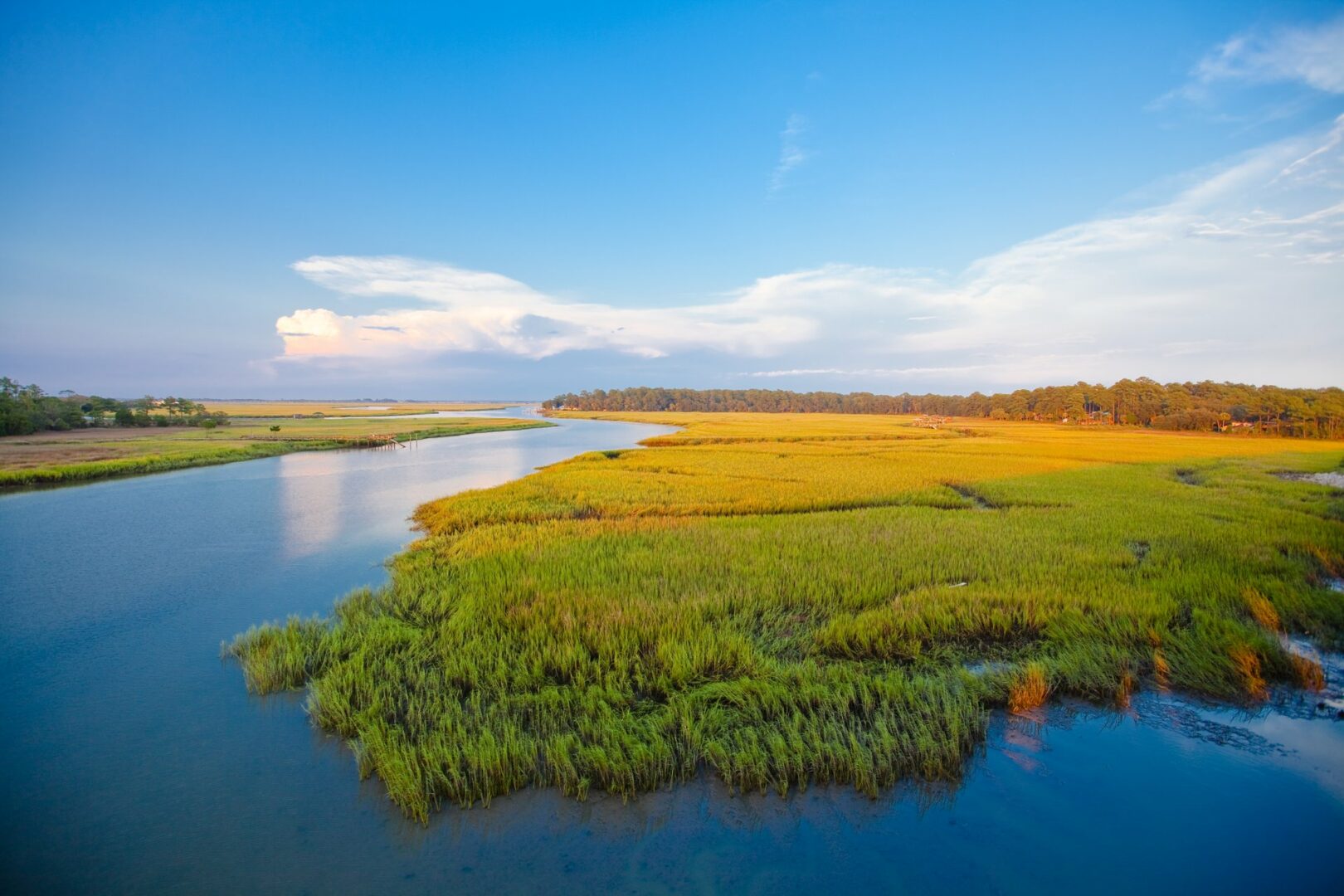 Little St. Simons Island, consisting mostly of low tidal salt marsh with forested upland tracts on its eastern (ocean) side, is privately owned and is accessible only by water. 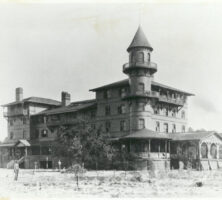 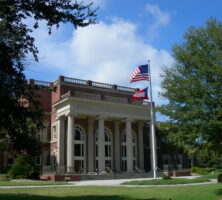 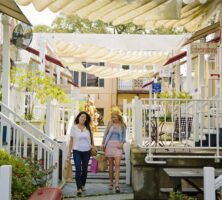 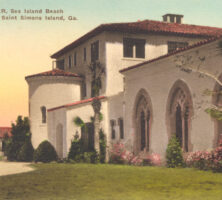 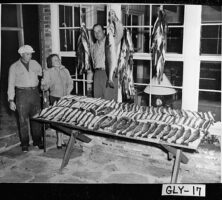 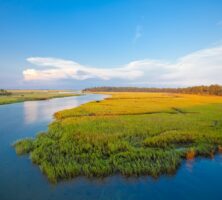